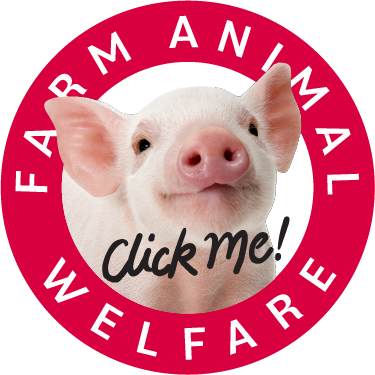 Advancing knowledge and collaboration to protect our animals. 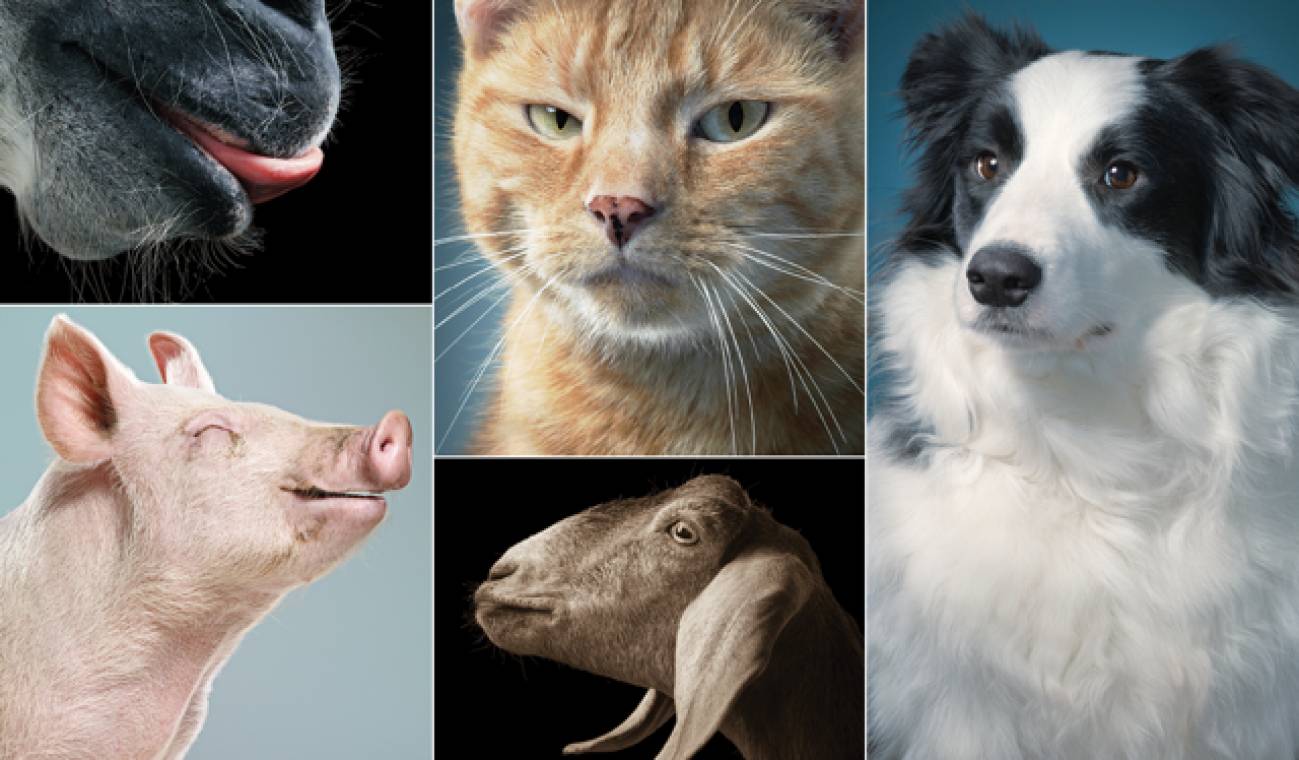 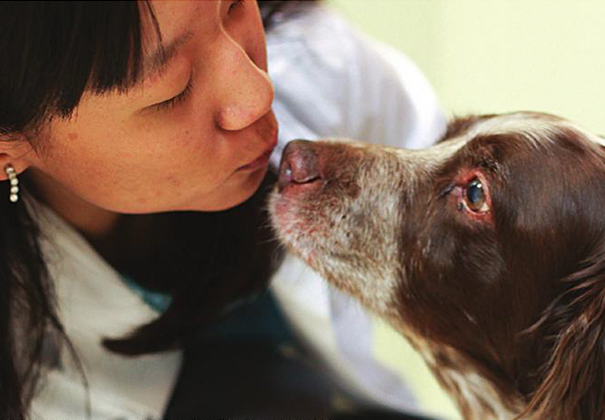 Three years in the making, the foundation publishes a landmark study.

In 2016, Kirkpatrick Foundation published the first-ever comprehensive study of a geographic region and its animal population. The 200-page report, written by principal investigator Kristy Wicker and co-author Manda Overturf Shank, has been presented across Oklahoma and at national conferences, including the National Sheriff's Association meeting with the National Link Coalition in Minneapolis and Animal Grantmakers's annual meeting in Denver.

To better understand the interconnection and complicated human-animal relationship, The Oklahoma Animal Study attempted to answer the question: What is the condition of animals in Oklahoma?  The question is not quickly or easily answered. Several factors influencing Oklahoma animal conditions include the Oklahoma and U.S. economy and how it affects the local and state level of support of animal programs; the political environment and the way in which voters and the state legislature decide and change laws; the use and view of private and public landownership; and, in general, how Oklahomans in rural and urban settings interact with, view, and respect animals. After reviewing the data collected and considering those key factors, the authors of The Oklahoma Animal Study found that the short answer to the overarching question is that Oklahoma animals are doing as well as, better, and not as well as animals in other parts of the nation and world.

Under the guidance of Louisa McCune and Paulette Black, executive director and program officer of the Kirkpatrick Foundation respectively, Kristy Wicker conducted a total of 114 interviews of animal community leaders and stakeholders between 2013 and 2015. Those interviewed included scientists, veterinarians, experts in the fields of animal behavior and wellbeing, animal welfare advocates, and individuals from animal protection organizations. Data for the report was also drawn from multiple sources of animal interests: interviews of local and national professionals, shelter surveys, scientific articles, government documents, and literature reviews. In the last phases of editing, Manda Overturf Shank analyzed the document for patterns, problems, and strengths in the status of animals in Oklahoma. Final compilation and editors’ analysis were reviewed by a team of experts from the various animal groups from across the U.S. Final design of the document was overseen and implemented by Louisa McCune and Steve Walker of Walker Creative, Inc.

Within the study, Oklahoma animals were categorized into subgroups to best observe the uniqueness of each group, with regard to use, care, and the daily lives of the animals. The subgroups include: companion animals, livestock, horses, wildlife, exotics, and laboratory animals. Among the issues of concern for the animal groups include the lack of basic animal shelter maintenance or free to low-cost veterinary services available to provide adequate care for companion animal populations. Companion animals were shown to have an over-population problem, similar to many other state in the nation. Unfortunately, current Oklahoma laws that restrict smaller cities and counties from creating public animal shelters, that affect spay and neuter services, and that allow for the use of gas chamber euthanasia and the practice of pound seizure hinder the ability of Oklahomans to adequately care for and manage pet overpopulation.

Like companion animals, Oklahoma horses also have an over-population problem. Domestic horses—racing, competitive, carriage, and those kept as pets— and wild horses face welfare issues arise when owners cannot afford or choose not to care for their horses. Overbreeding has also contributed to the overpopulation crisis. The 2013 lifting of the ban on horse slaughter in Oklahoma brought the topic of horse euthanasia and the problem of horse overpopulation to public debate. The authors of the study found that the current lives of Oklahoma horses, specifically racing horses, would improve if current rules and laws governing each Oklahoma horse industry better reflected all national and international standards of care.

Interviews and research for The Oklahoma Animal Study found that the food animals of Oklahoma, such as hogs, cows, and chickens, are meeting current national and legal standards of care. However, Oklahoma and national animal protection groups criticize the current way the livestock industries hold animals in intensive confinement and for the industrial practices such as sow crates and chicken debeaking. Currently demands by the consumer, and in turn, national corporations are potentially changing the way meat animals are cared for at farming and slaughter facilities. Defining what it means to humanely care for livestock remains a topic of controversy between corporate agribusiness, environmentalists, animal welfare advocates, and individual family farmers.

Alongside the normal wrath of Mother Nature and habitat destruction, the wellbeing and mortality of Oklahoma wildlife is compromised by the scarcity of rehabilitation facilities, emergency rescue plans, and trained personnel in the state. While Oklahoma has a strong hunting and trapping tradition, there is room for broader education of the general public in regards to the laws regulating human and wildlife interaction. The urbanization of the Oklahoma landscape also creates a unique potential for wildlife to intermix with humans and, with education and proper government oversight, those interactions do not have to be negative for either party.

Although laboratory animals, like farm animals, are highly regulated by the USDA, these creatures are probably the most “unnoticed” group in the study, due in part to the general public’s relatively nonexistent interaction with this subgroup. However, allegations in 2015 against the two large research universities in Oklahoma may have done a lot to bring this group to the forefront of the animal-welfare discussion. The findings from our study show that research facilities should continue to evaluate modern alternative research methods including the use of non-animal testing techniques. Oklahoma’s current pound seizure law is also a potential area of welfare concern for lab animals.

As noted by members of the scientific community, human and non-human welfare can be viewed as co-dependent and non-exclusive; achieving significant improvement in animal well-being requires deep social, psychological, and economic adjustment on the part of our own species. By learning new ways to minimize human causes of animal suffering, our species is charged with creating a new identity and new social compacts with fellow human beings. It is because of this inextricable link between human and animal welfare and because Oklahoma communities view themselves as rooted in proud traditions of cooperation and commitment— and moral and ethical standards—that the Kirkpatrick Foundation hopes that governments, businesses, organizations, and individuals will see the merits of The Oklahoma Animal Study as well as the Kirkpatrick Foundation’s approach to research, convene, honor, promote, and fund efforts to improve the lives of Oklahoma animals and the people who care for them.

Although The Oklahoma Animal Study is extensive and thorough, the authors of the study and the Kirkpatrick Foundation understand that the study represents a starting document to a more comprehensive understanding of the role and life of animals in Oklahoma. We invite you to learn more about the study by clicking on the image below. 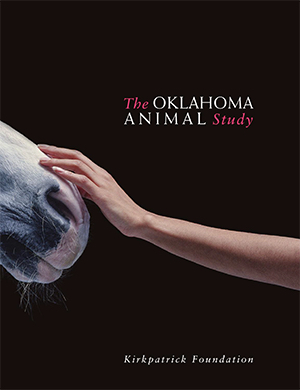